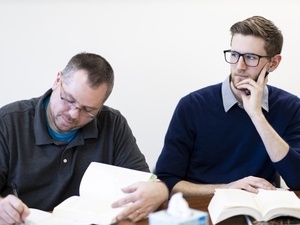 Dr. Spencer Johnston is a British Academy Postdoctoral Research Fellow at the University of Cambridge and a Research Associate at Peterhouse. His main areas of specialization are in the history and philosophy of logic, medieval philosophy, and formal logic.

Lecture Abstract: In the 19th and early 20th centuries, one finds a number of critiques of "traditional logic," including medieval logic. For example, a common and oft repeated critique of "traditional" logic is that it lacks the expressive resources to be able to handle a number of kinds of arguments, e.g. relational syllogisms like "Every donkey is an animal, so every tail of a donkey is a tail of an animal." Others objected that "traditional" logic was far too closely wedded to metaphysical considerations for it to be fit for purpose. Far from being damning, Dr. Johnston will argue that these objections would not have held against the best logical theories on offer in the Middle Ages as developed by authors (both nominalist and realist) in the 14th century. In particular, Dr. Johnston will argue that medieval logic had the resources to handle Russell et. al, while also diffusing some of the more "traditional" concerns about mathematical logic and its built-in hostility to metaphysics.

Login with your Hillsdale account to interact with events, personalize your calendar, and get recommendations.